I cannot tell you enough about this magical fruit. You have to taste kumquats to feel the amazing taste and flavour as it bursts into your mouth. Eaten raw are delicious but you can also make cakes, candy, or add them to braising liquids just as I did in this recipe.

Since kumquats belong to the same family as oranges, pork or duck would be the obvious choices to cook them with. This pork belly was braised for 2 ½ hours in koumandaria (Cyprus sweet wine) and kumquats. The result is a meltingly soft, flavourful piece of meat with the most amazing pan sauce. A liberal rubbing of cinnamon on the pork turns it into a heavenly aromatic dish. Serve it with rice or mashed potatoes to soak up all the juices. Don’t leave a drop behind. 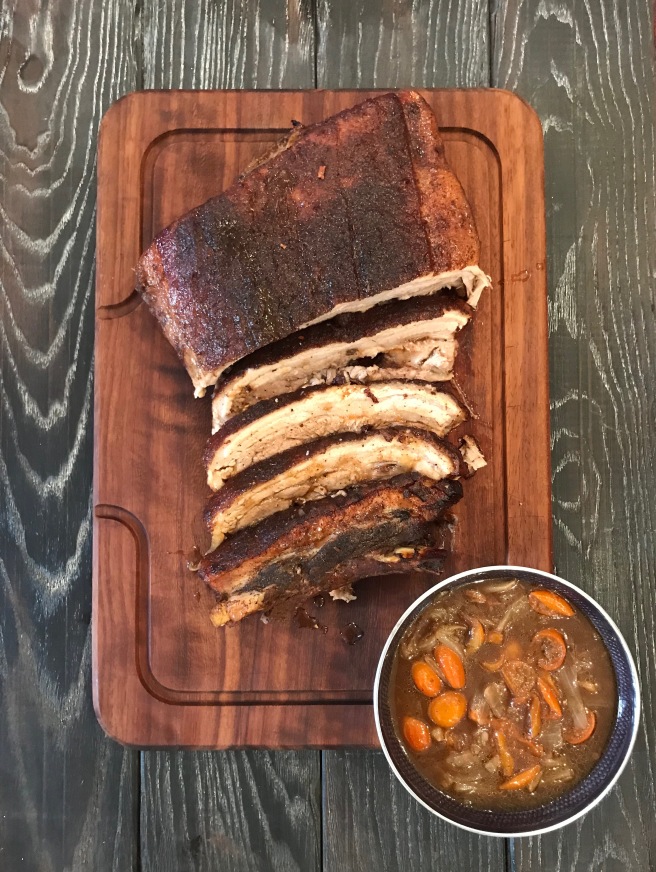 Whisk together in a bowl the orange juice, Koumandaria or port, balsamic, maple syrup and chicken broth. Pour this mixture in the pan, around the pork belly. Add the kumquats.

Cover the pan with heavy duty foil. Transfer pan in the preheated oven and cook for 2 hours. Uncover the pan and baste pork belly with the pan juices. Increase oven temperature to 200 C and continue roasting, uncovered for 25-30 minutes longer until pork skin is nicely charred.

Transfer pork on a platter and cover with foil. Let it rest while you make the sauce.

Take the baking pan with all the juices, onions and kumquats and place it directly on the stove over medium-high heat. Dissolve corn flour in about 2 tablespoons water and add it to the pan. Cook stirring until pan juices have thickened and you have a nice sauce.