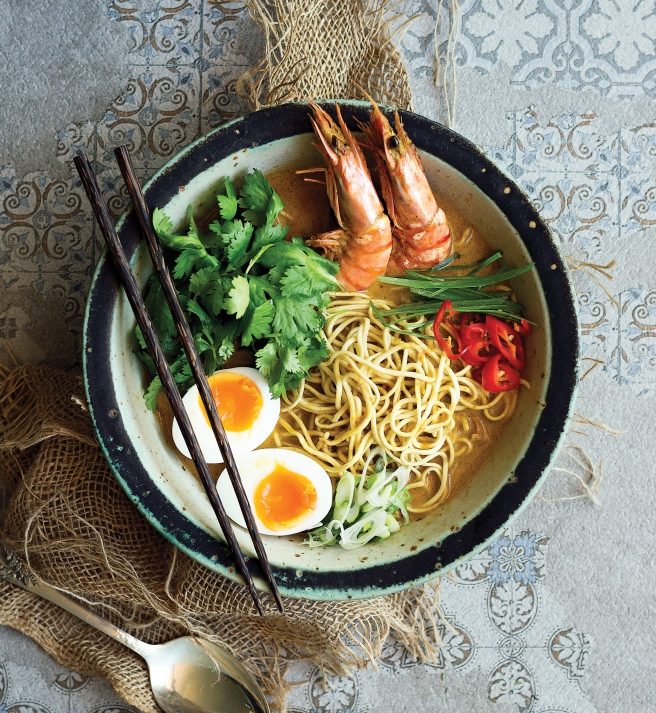 I couldn’t resist adding coconut milk. I know it’s not the traditional ramen dish but it’s sooooooo tasty! I created the delicious broth with the prawn shells and it came out phenomenal. I used thin egg noodles as I think they are hard to overcook. There’s nothing worse than overcooked noodles in your ramen so if you can’t get hold of ramen noodles, egg noodles are the best choice. This is one tasty dish. Serve with chopsticks and a spoon. Whatever is left, just pick up the bowl with both hands and sip. Don’t leave a drop behind.

For the aromatic paste

To complete the ramen

Put all ingredients for the aromatic paste in the bowl of a food processor or blender. Blend until a paste forms. Set aside until needed

Cook the noodles in plenty of boiling water, 2 minutes less than the time indicated on the packet instructions. Drain and rince with cold water.

Peel 12 of the prawns and set aside in a bowl. Put the heads and shells in a saucepan with enough water to cover them. Bring to boil and simmer for half an hour. Drain and keep only the broth. Measure 4 cups. If your broth is less than that, add water to reach 4 cups.

In a large pot add the aromatic paste over medium high heat. Cook stirring 1-2 minutes until slightly thickened and aromatic. Add the coconut milk and the 4 cups broth. Bring to boil and the 8 unpeeled prawns. Cook for 2 minutes until cooked through. Remove whole prawns from the broth and set aside in a bowl. Add the peeled prawns in the broth and turn off the heat. The prawns will cook in the hot broth.

To serve the ramen, take 4 deep bowls. Add first 1 cup cooked noodles in each bowl. Divide the broth and prawns equally in the four bowls. Add 2 whole prawns, some spring onions, fresh coriander, one boiled egg halved and chilli peppers. Serve at once.