This is a variation of my tahini cinnamon rolls. I took an instagram challenge to create something exciting and delicious using chocolate. I don’t know if I this is the grand prize winning entry but it sure is a winner in my house. Tahini and chocolate go so well together. The orange accent in the syrup and a touch of salt in the filling make these rolls almost addictive. You can make the dough in the bowl of a food processor for speed. In fact the only challenge you might (I said might) face is rolling the dough to a large enough rectangle. The rest is easy and the looks… don’t get me started. I’m in love with this! 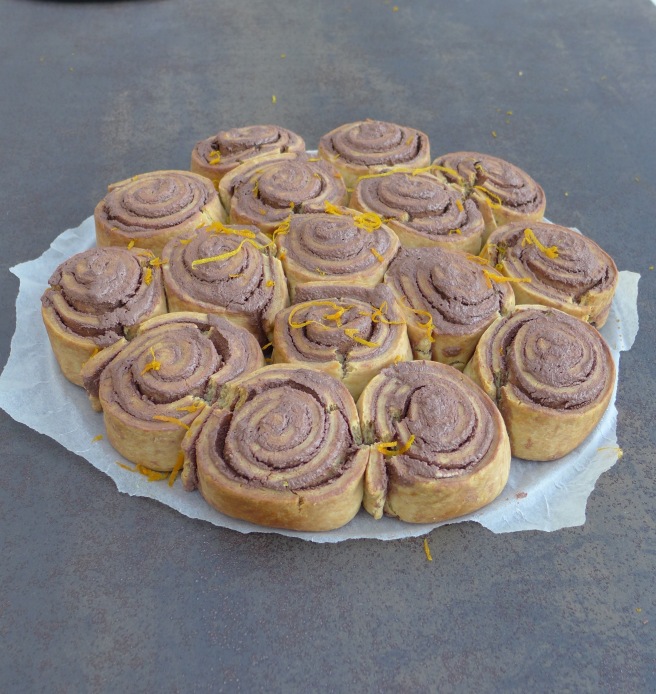 In a bowl of a food processor add the flour, sugar, yeast, baking soda and baking powder. Pulse a few times until mixed. Add the salt and orange zest and mix again. You do this, because you don’t want the salt to come in contact with the yeast, as it will kill it and your dough won’t rise.

Add the tahini and the lukewarm milk and mix until dough comes together, and a ball forms. If dough is too sticky add some more flour. Knead briefly on a floured surface and put in an oiled bowl. Cover with a towel and let dough rise in a draft free area, for about 1 -1 ½ hours. The dough won’t rise too much but it will become softer as it rests.

Make the filling while dough rises. Mix tahini paste, sugar, cocoa powder and salt in a bowl. Melt the chocolate in a double boiler and add it to the tahini mixture. Stir everything together until everything is incorporated.

Make the syrup. Put all ingredients in a small pot. Bring to boil, then lower the heat and simmer for 2 minutes. Take off the heat and leave to cool.

Put your dough on a lightly floured surface. With a rolling pin stretch to a large rectangle, about 50 x 60cm. Spread the filling evenly on the surface of the rectangle. I use a small offset spatula for ease but you can also use a silicon spatula or the back of a spoon. Starting from the long side, roll up the dough like a swiss roll. You will end up with a 60cm long roll. With a sharp knife slice the roll at about 2,5 cm intervals. Put your rolls, cut side up in the prepared pan. Don’t crump them as they will expand and rise in the oven.

Bake for 35-38 minutes, until nicely coloured. Take the pan out of the oven. Pour the syrup slowly and evenly on top of the rolls. Leave them to cool for 1-2 hours. Serve in a round platter, pull apart and enjoy.

One thought on “Tahini Chocolate Rolls”