There are only a handful of food combinations, I don’t particularly like. One, is fish and tomato. I could even say no, to a fantastic Bouillabaisse, given another choice. It was only until I visited Barcelona that my taste buds changed my mind permanently. Everywhere we went, the restaurants featured this sauce Romesco on the menu, which was almost always served with fish. Its a spicy, tomato based sauce but with a unique flavour. It originated from the fishermen who made this sauce by roasting together garlic, chillies, tomatoes and red peppers. Then they mixed it with -wait for it- almonds and bread. The result is a divine, almost addictive red sauce. I think it’s, by far the best way to use left over tomatoes, you stashed somewhere in the fridge. 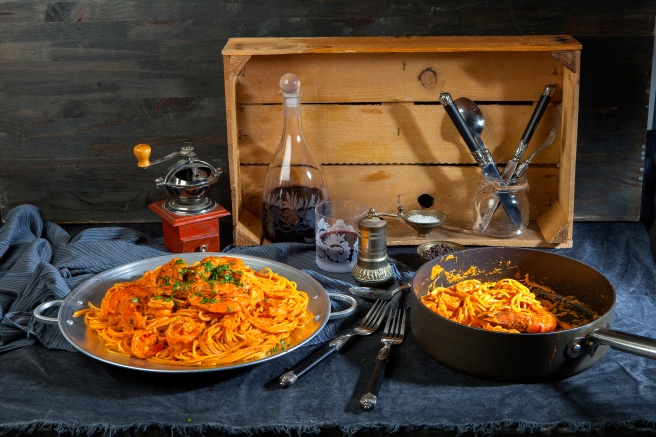 Romesco is not traditionally served as a pasta sauce, but believe me when I say, it is absolutely fantastic served with linguini. You will lick the plate, trust me.

Preheat oven to 175 C (345 F). Put tomatoes (cut side down), red pepper, chillies, onions and garlic in a baking pan and drizzle with 1/3 cup olive oil. Season with salt and pepper and bake for 40 minutes.

In a small saucepan, add 1 Tbs olive oil over medium heat. Add the almonds and sautee stirring frequently until fragrant and roasted. Remove with a slotted spoon. In the same saucepan add the bread and cook for a minute or so until lightly toasted. Take bread out of pan and put with the almonds.

Put baked vegetables in a blender with the almonds and bread. Blend until everything is very smooth. Put sauce in a bowl and add the vinegar and paprica. Serve with grilled prawns or any other fish or shellfish of your choice, with some grilled spring onions. Flavor the prawns with a squeeze of lemon.

Alternatively you can cook some prawns in the sauce, for a couple of minutes, and serve with pasta.

“Pastellaki”. I could eat tons of this (not during bikini season...). Sesame, nuts, carob molasses. That’s it! Perfect bite any time. #febulouscypriotfood #pastellaki #cypriotfood #healthyfood
Every year, right after green Monday our house used to smell of cinnamon and freshly baked “koulourakia” (cookies). They are vegan, sweetened with carob molasses and perfect for dunking into coffee during Greek lent. I developed my mom’s recipe and took it one step further by adding tahini in the mix. I LOVE tahini in all forms and in this recipe it works like a dream. Recipe is in my second cookbook “be my guest” and on my blog through link in bio. Part of the #febulouscypriotfood campaign ❤️ #koulourakia #cookies #biscuits #cypriotfood #healthyfood #vegan #vegetarian
Pasta love ❤️ Linguini with prawns, fennel, ouzo and feta. Pasta heaven! #prawn #linguini #ouzo #feta #mediterraneandiet #pasta #pastalover
Want to know how to make SERIOUSLY ADDICTIVE, home baked, cheese crackers? Head over to my stories for a step-by-step. You really have to try these! #ritzcrackers #cheese #crackers #thermomix @thermomixcy #addictive
So, I had so much cheese in the fridge and some forgotten courgettes, I had to make this loaf. It reminds me of my birthday parties (a million years ago), where my mom would bake a similar version of this savory cake. I have written the recipe below for you to experiment with. I love the addition of courgettes and someone told me that I could actually add spinach! Next time! . Recipe here 👇🏼 . Savory courgettes and cheese cake: Ingredients: 150 grams coarsely grated courgettes 150 grams feta, crumbled 100 grams grated halloumi 100 grams grated Edam cheese 100 grams raisins 2 Tbs fresh mint (or dried) 1/2 tsp black pepper 280 grams all purpose flour 2 tsp baking powder 1/2 tsp baking soda 3 large eggs 130 grams Greek style yogurt 125 ml olive oil 1/4 tsp salt Sesame seeds for sprinkling . Method: Preheat oven to 175 C, fan. Line a 13 x 23 cm loaf pan with grease proof paper. . In a large bowl, mix together courgettes, feta, halloumi, Edam cheese, raisins, mint and black pepper. . Sift flour with baking powder and soda directly into the bowl with the cheeses. Mix everything together. . In another bowl, whisk the eggs with the yogurt, olive oil and salt. Add eggs to flour/cheese mixture. Mix well. Mixture will be thick. . Transfer mixture to prepared pan and level the surface. Sprinkle with sesame seeds. Bake for 55-60 minutes. Serve warm or at room temp. Enjoy! . #cheesepie #tyropita #savorycake #cheese
“Pilafi pourgouri” (bulgur pilaf): This is definitely my favorite side dish. I could eat it with anything. It goes down particularly well with a dollop of thick yogurt. . My moms advice is always to use plenty of olive oil when cooking bulgur. Her ratio is 4 tablespoons per cup of bulgur. I reduced this somewhat and added lots of veggies and chickpeas to serve it like a proper vegetarian main. Sweet potatoes, courgettes, spring onions and any veg that’s in your fridge would work with bulgur. . Another vegan #febulouscypriotfood ! Grab the recipe on my blog through link in bio. #bulgur #pilaf #vegan #vegetarian #cypriotfood #healthyfood